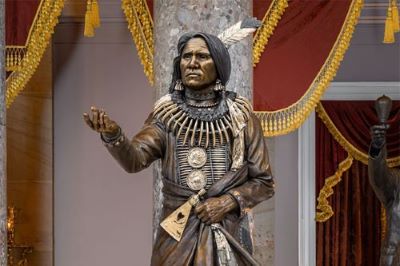 (Washington, D.C.) – On Tuesday, November 17, the Nebraska Commission on Indian Affairs will premiere its new documentary on the creation, journey and installation of a bronze sculpture of Ponca Chief Standing Bear in Statuary Hall at the U.S. Capitol.

Chief Standing Bear: A Journey to Statuary Hall features interviews with many of the people involved in the remarkable story behind the placement of the statue, which was unveiled at a dedication ceremony in September 2019 following a nearly 18-month effort. The film will debut as part of Lied’s Mosaic Film festival, which will also host a panel discussion with those who helped in the process.

Akin Gump senior counsel Katie Brossy, herself a Ponca Tribe member, led Akin Gump’s pro bono efforts in the matter and is featured in the film.

“This film is a wonderful testament to the efforts of so many who worked to make this project a reality,” said Ms. Brossy. “It fills me with pride and joy to know that a statue of Chief Standing Bear—a respected civil rights icon and a member of my tribe—resides alongside so many other great Americans in Statuary Hall. It was an honor, both professionally and personally, to be able to play a role in this project.”

Chief Standing Bear is revered for his struggle to gain equality and justice for Native peoples across the U.S. In 1877, Chief Standing Bear and the Ponca Tribe were forced by federal treaty to leave their homeland in Nebraska for Indian Territory in what is now Oklahoma, which led to many members of the tribe perishing—including Chief Standing Bear’s son. Determined to honor his son’s dying wish to be buried in his homeland, Chief Standing Bear, along with 30 Poncas, walked over 500 miles back to their home in Nebraska. A resulting court case, Standing Bear v. Crook, in which Standing Bear sued for, and won, freedom from U. S. Army custody for himself and his companions, became not only the first time in which an indigenous person spoke before a U. S. federal court, it also established that Native Americans were persons and, as such, had civil rights.

A trailer for Chief Standing Bear: A Journey to Statuary Hall may be viewed here. More information about the statue and about Ms. Brossy’s and the firm’s role in securing its placement in the Capitol may be found here.

Those wishing to view a livestream of the premiere of the film may register for tickets at www.liedcenter.org/film.

Akin Gump Strauss Hauer & Feld LLP is a leading international law firm with more than 900 lawyers and advisors in offices throughout the United States, Europe, Asia and the Middle East. Founded in 1945, the firm is proudly celebrating its 75th anniversary in 2020. #AkinGump75

Stay up to date!